"There will be a black Springbok over my dead body." - Dr Danie Craven, President of the South African Rugby Board, 1969 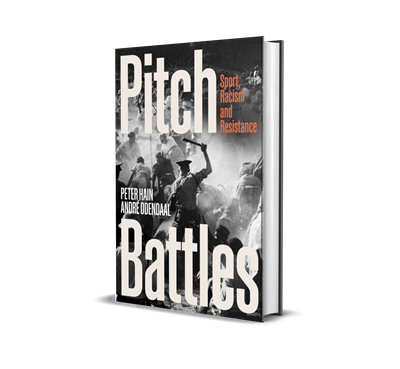 Daily Mail: Hain stops play: How a 20-year-old plotted to halt apartheid South Africa's 1970 cricket tour of England from his bedroom... and helped change the world in the process

Just a year after the controversial D'Oliveira affair, the organised disruption of the all-white 1969/70 South African rugby and cricket tours to Britain represented a significant challenge to apartheid politics. Led by future cabinet minister Peter Hain, the "Stop the Seventy Tour" campaign brought about the cancellation of both tours, presaging white South Africa's expulsion from the Olympics and the end of apartheid sport altogether. With his brand of attention-grabbing, direct action sports protest, the 19-year-old Hain emerged as a hero to some and enemy to others. Now, reflecting on these experiences with fifty years of hindsight, Lord Hain, together with South Africa's foremost sports historian and fellow anti-apartheid activist Andre Odendaal, shows how decades of relentless international and domestic campaigning for equality led to a Springbok team captained by black athlete Siya Kolisi winning the 2019 Rugby World Cup. Interspersing a wide range of examples with personal testimony, Pitch Battles explores the themes of sport, globalisation and resistance from the deep past to the present day. Published in the same year as the Stop The Tour documentary from acclaimed director Louis Myles, this compelling story of sacrifice, struggle and triumph reveals how sport should never be divorced from politics or society's values.

Peter Hain spent his childhood in South Africa. After his anti-apartheid parents were jailed, banned and forced into exile in Britain, he led campaigns to stop all-white Springbok and other all-white sports tours, later becoming a Labour MP and Cabinet Minister, then a member of the House of Lords and author of over twenty books.

André Odendaal is Honorary Professor in History and Heritage Studies at the University of the Western Cape. A former first-class cricketer and anti-apartheid activist, he is author or co-author of a dozen books on the social history of sport and the history of the liberation struggle in South Africa.

“A brilliant study of how sports played a crucial role in ending apartheid.”

"The sports struggle was crucial in defeating apartheid."

"Stopping the 1970 cricket tour confronted white South Africa with the necessity to end racism in cricket."

"I refused to play against the Springboks because that would have meant playing with apartheid and betraying many friends."

"Sportsmen and women like me were not allowed to represent their country in the past. Pitch Battles shows how this came about. And it outlines how decades of struggle opened up opportunities for my generation."