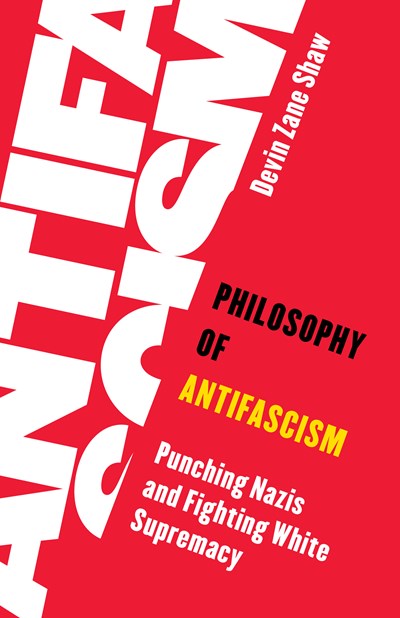 On January 20th, 2017, during an interview on the streets of Washington D.C., white nationalist Richard Spencer was punched by an anonymous antifascist. The moment was caught on video and quickly went viral, and soon “punching Nazis” was a topic of heated public debate. How might this kind of militant action be conceived of, or justified, philosophically? Can we find a deep commitment to antifascism in the history of philosophy?

Through the existentialism of Simone de Beauvoir, with some reference to Fanon and Sartre, this book identifies the philosophical reasons for the political action being enacted by contemporary antifascists. In addition, using the work of Jacques Rancière, it argues that the alt-right and the far right aren’t a kind of politics at all, but rather forms of parapolitical and paramilitary mobilization aimed at re-entrenching the power of the state and capital.

Devin Shaw argues that in order to resist fascist mobilization, contemporary movements find a diversity of tactics more useful than principled nonviolence. Antifascism must focus on the systemic causes of the re-emergence of fascism, and thus must fight capital accumulation and the underlying white supremacism. Providing new, incisive interpretations of Beauvoir, existentialism, and Rancière, he makes the case for organizing a broader militant movement against fascism.

Devin Zane Shaw teaches philosophy at Douglas College, Canada. He is author of Egalitarian Moments: From Descartes to Rancière (2016) and Freedom and Nature in Schelling’s Philosophy of Art (2010). He writes about philosophy, political theory, and social movements and co-edits the ‘Living Existentialism’ book series.

“Shaw succeeds in preparing the ground for antifascist movement building as well as in helping us better understand antifascism. … The potential of his work lies in sketching links between newly emerging social forces while also providing us with an ethical frame that suggests we should in some circumstances appreciate – rather than outright dismiss – the role of violence in social movements.” — Social Movement Studies

“Written with refreshing clarity, this insightful work is anchored in existentialism’s commitment to antifascism traced from Sartre to Fanon, culminating in the possibility of decoloniality. An important read in increasingly troubling times with the rise of fascist and racist ideology in the west.” — danielle davis, Research Fellow, University of New England, Australia

“This is a most enticing and topical book. Both philosophically rigorous and politically relevant. Its discussion of the philosophical materials illuminates the coordinates for the coming struggle against emerging forms of neo- and derivative fascism. Especially de Beauvoir’s take on ethical drama and her negation of negative resignation. Thus inspired, the analysis of varieties and forms of violence in the concrete situation is innovative and very apposite. Ambiguity, understood as ethical negotiation, as taking a stand vis-à-vis the concrete situation, is necessary to fight the bastards. In between de Beauvoir, Fanon and Rancière we learn that there is no clay-model for revolution, and yet, like this book, we must pull no punches!” — Oscar Guardiola-Rivera, Reader in Law and Political Philosophy, Birkbeck College, University of London

“One sees the word 'ethics' invoked everywhere these days, but too often it serves as a pretext for over-cautious liberalism at best, and antipolitical reaction at worst. Against the grain, Devin Zane Shaw has produced a true work of ethics: an ambitious book articulating no less than a possible synthesis of the diversity of tactics and radical egalitarianism.” — Matthew Robert McLennan, Director and Associate Professor of Philosophy, Saint Paul University